What is the Difference Between an AC and DC Motor?

An electromechanical machine that converts the electrical energy into mechanical energy is called an electric motor. These are the devices that produce a rotational force which is processed through operative automation.

The functioning of the electric motor mainly relies on the interaction of magnetic and electric fields. The commonly used parts used in electric motors are Central motor shaft, Windings, Bearings (to reduce friction and wear), Armature (located on the rotor, the rotating part, or the stator, the stationary part), Brushes (in DC motors), Terminals, Frame and end shields.

In an AC motor, there is a hoop of electromagnets organized across the outdoors (making up the stator). Which can be designed to provide a rotating magnetic field. Inside the stator, there’s an axle made of solid metal, a loop of wire, a coil, a squirrel cage made of metal bars, and interconnections. There are also some other freely rotating metal parts that can conduct electricity.

Either way, the induced current produces its own magnetic field and, according to another law of electromagnetism (Lenz’s law) tries to stop whatever it is that causes the rotating magnetic field—by rotating as well. AC motors offer a relatively efficient method of producing mechanical energy from a simple electrical input signal.

These motors are based on a piece of wire bent into a rectangular loop. This loop is suspended between the poles of a magnet. Through hooking up a wire and connecting it to a battery, there’s a flow of direct current (DC) through it and thus a temporary magnetic field is produced all around it. This temporary field repels the original field from the permanent magnet, causing the wire to flip over.

Normally the wire would stop at that point and then flip back again. But if an ingenious, rotating connection used (which is called a commutator), the current can be reversed every time the wire flips over. This means the wire will keep rotating in the same direction for as long as the current keeps flowing. The essence of this simple DC electric motor was conceived in the 1820s by Michael Faraday and turned into a practical invention about a decade later by William Sturgeon.

Difference Between AC and DC Motor

Without the primal distinction, that is the input of alternate and direct current AC and Dc motors have several other differences. 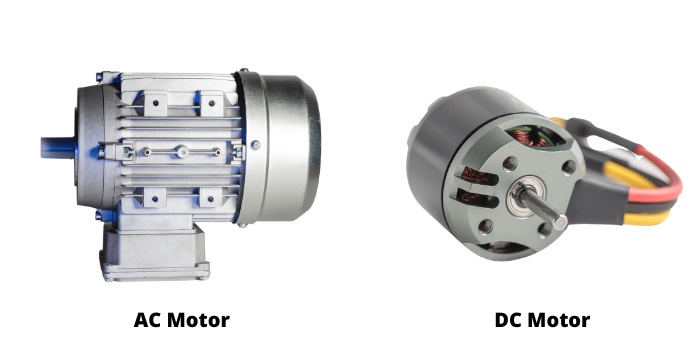 The difference between AC and DC motors is not only significant from the technical point of view. It is also essential for practical demonstrations as well. Whether an engineer or a business enthusiast, one can not choose the right one meeting his purpose without knowledge of the basic technical differences.